VTE includes deep-vein thrombosis (DVT) and pulmonary embolism (PE). DVT is a blood clot that partially or totally blocks the blood flow through a vein, typically in the lower leg or thigh. The symptoms of DVT include discomfort, pain, edema, redness, and distended veins. DVT can progress to PE—a thrombus in the lungs—and can result in sudden death.2 The adverse consequences of VTE are significant, including approximately 300,000 fatalities and hundreds of thousands of hospitalizations annually.1

In addition to advancing patient age, the risk factors for VTE include a history of VTE, surgery or trauma within 3 to 6 months, hospitalization or nursing home confınement, active cancer, paralysis of the leg, obesity, venous catheterization, pregnancy and the postpartum period, estrogen use, and various medical conditions (eg, myocardial infarction, stroke, systemic lupus erythematosus, inflammatory bowel disease, and hematologic conditions).3,4

Patients who undergo joint replacement procedures, including total hip replacement surgery and total knee replacement surgery, are at a high risk for VTE and require effective thromboprophylaxis.5 The American College of Chest Physicians has estimated that the baseline risk for symptomatic VTE and bleeding in the absence of prophylaxis is 4.3% for the first 35 days after major orthopedic surgery.5

Strategies to reduce the risk for VTE in patients who are undergoing joint replacement surgery include low-molecular-weight heparin (LMWH), such as enoxaparin or dalteparin; fondaparinux; oral antithrombotic drugs, such as dabigatran or rivaroxaban; aspirin; vitamin K antagonists; and mechanical methods (eg, intermittent pneumatic compression device).8 The administration of prophylactic medications must be balanced against the hazard of symptomatic bleeding events, as well as their practical limitations.8 For example, LMWH and fondaparinux require subcutaneous injections; warfarin has a delayed onset of action, making it relatively ineffective in the immediate postsurgical time period. Furthermore, compression devices can be cumbersome and are relatively ineffective after hip replacement surgery.8

Novel oral antithrombotic agents combine the convenience of administration with efficacy and safety profiles that are comparable or superior to other methods.8 Rivaroxaban, a factor Xa inhibitor, was approved on July 1, 2011, by the US Food and Drug Administration (FDA) to reduce the risk for blood clots, DVT, and PE after knee or hip replacement surgery.9,10 Dabigatran, a direct thrombin inhibitor, is not approved by the FDA for use in patients undergoing joint replacement surgery,11 but it has been evaluated in several phase 3 clinical trials for the prevention of VTE in patients who undergo these procedures.12-14

Because VTE is associated with several potentially serious complications, its economic burden on the US healthcare system is significant. Using a large, geographically diverse US managed care database, a 2009 study estimated the annualized total healthcare costs across the entire continuum of care for patients who presented with DVT and/or PE.15 The study showed that during and after DVT, PE, and DVT/PE events, the annualized median costs increased to $17,512, $18,901, and $25,554, respectively, compared with a median cost of $680 in the control group. The investigators concluded that clinical and economic benefits are likely to result from early detection and the appropriate treatment of DVT.15

In 2014, apixaban (Eliquis; Bristol-Myers Squibb and Pfizer) received 2 new indications. On March 13, 2014, the FDA approved apixaban for the prophylaxis of DVT, which may lead to PE, in patients who have undergone hip or knee replacement surgery.16,17 On August 21, 2014, apixaban received supplemental approval for the treatment of DVT and PE, and for risk reduction of recurrent DVT and PE after initial therapy.18,19

Apixaban was first approved by the FDA on December 28, 2012, to reduce the risk for stroke and systemic embolism in patients with nonvalvular atrial fibrillation (NVAF).19,20 This approval was contingent on the manufacturer’s provision of a Risk Evaluation and Mitigation Strategies program to inform healthcare professionals about the increased risk for thrombotic events, including stroke, when apixaban is prematurely discontinuing without an adequate alternative anticoagulant use.19

The FDA approved apixaban for DVT prophylaxis and for the prevention of PE, in patients who have undergone hip or knee replacement surgery, after reviewing data from studies conducted as a part of the ADVANCE trial program.8,17,19,21 The pooled data from 2 of the ADVANCE trials showed that apixaban was more effective than enoxaparin for the prevention of VTE in patients undergoing hip or knee replacement surgery.21

The approval of apixaban for the treatment of DVT and PE, and for risk reduction for recurrent DVT and PE after initial therapy, was based on data from 2 global studies—AMPLIFY and AMPLIFY-EXT.18,22,23 In AMPLIFY, apixaban demonstrated efficacy comparable with standard of care using a composite efficacy end point of recurrent symptomatic VTE or VTE-related death.19,22 In addition, apixaban demonstrated superiority in the primary safety end point of major bleeding, as well as fewer clinically rele­­vant nonmajor bleeding events.19,22

In the AMPLIFY-EXT clinical trial, patients who had completed 6 to 12 months of anticoagulant therapy without having a recurrent event were randomized to receive apixaban or placebo for 12 months.19,23 Both doses of apixaban (ie, 5 mg and 2.5 mg) were superior to placebo in the primary end point of symptomatic recurrent VTE (nonfatal DVT or nonfatal PE) or all-cause death.19,23

To reduce the risks for recurrence after at least 6 months of treatment for DVT or PE, the recommended dose of apixaban is 2.5 mg orally twice daily.19

For patients who are unable to swallow tablets, the 5-mg and 2.5-mg apixaban tablets may be crushed and suspended in a dextrose solution and immediately delivered through a nasogastric tube.19

The ADVANCE Clinical Trials: Prophylaxis of DVT After Hip or Knee Replacement Surgery

The ADVANCE clinical trials randomized more than 11,000 patients to assess the safety and efficacy of apixaban in preventing DVT in patients who have undergone hip or knee replacement surgery.8,17,21 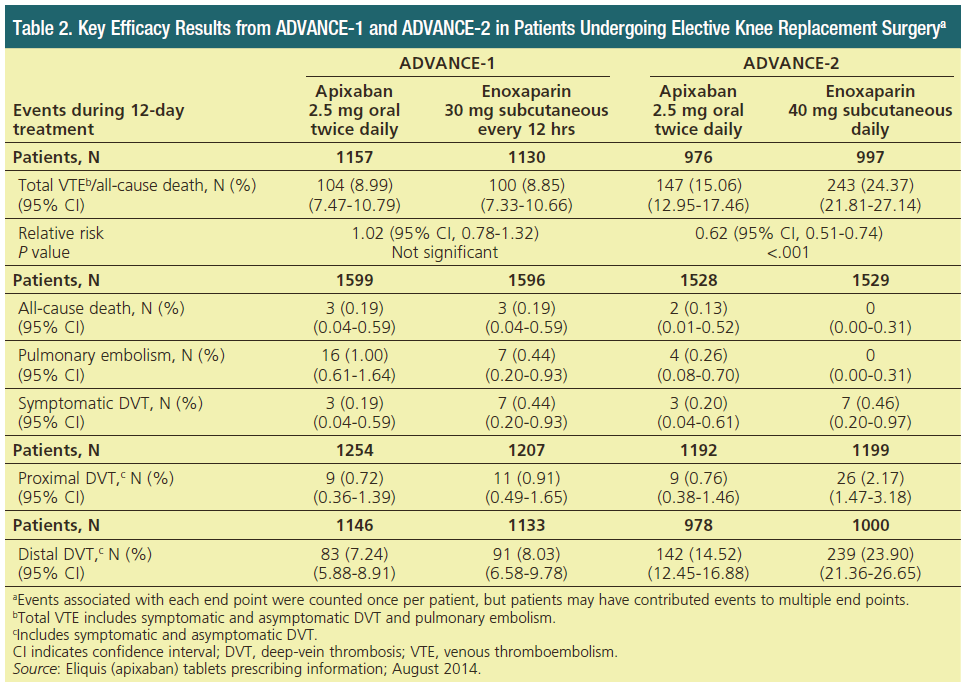 Efficacy data for apixaban and enoxaparin from the ADVANCE-3 trial (ie, patients undergoing hip replacement surgery) are summarized in Table 3.19 The efficacy of apixaban was generally consistent across patient subgroups, including age, sex, race, body weight, and renal impairment.19 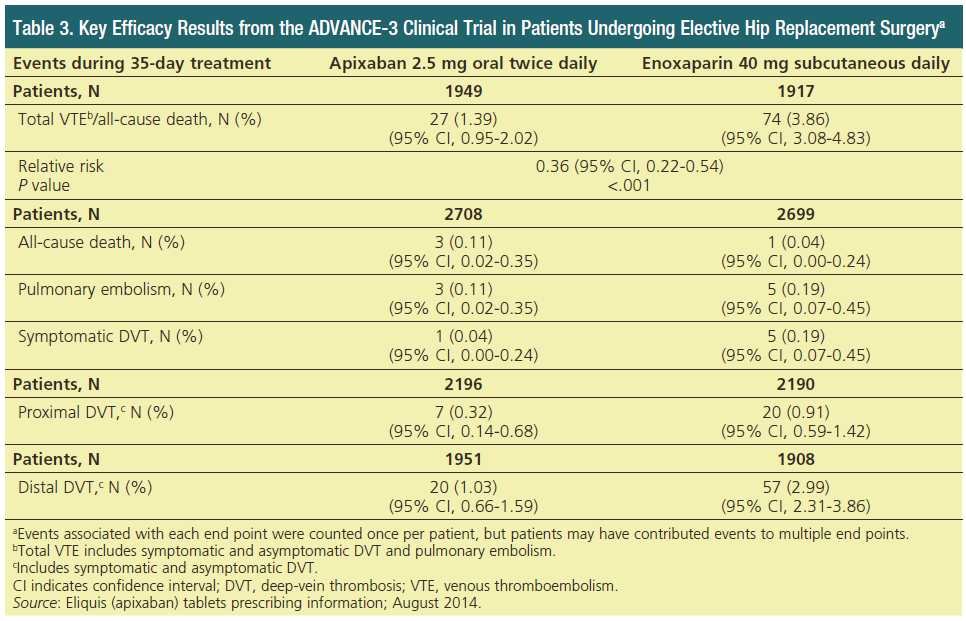 Table 4 summarizes the bleeding results during the treatment period in the phase 3 studies. In each study, bleeding was assessed starting with the first dose of the double-blind study drug.19 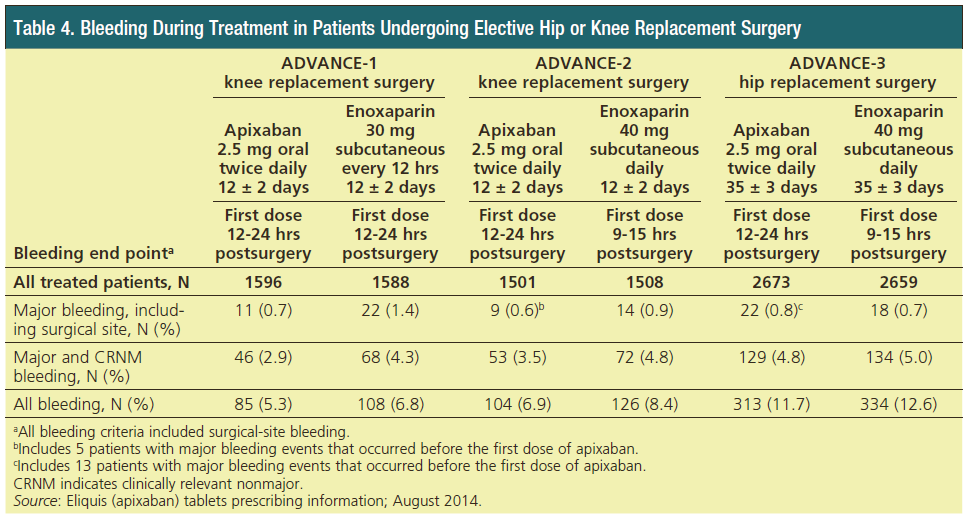 AMPLIFY and AMPLIFY-EXT Trials: Treatment of DVT and PE, and Reduction in Risk for Recurrent DVT and PE After Initial Therapy

AMPLIFY was a randomized, double-blind clinical trial that investigated the efficacy and safety of apixaban for the treatment of patients with confirmed symptomatic DVT or PE. In AMPLIFY, apixaban was compared with the standard of care (ie, initial enoxaparin treat­ment for at least 5 days), followed by warfar­in therapy (international normalized ratio range, 2.0-3.0) for 6 months in patients with confirmed symptomatic DVT and/or PE.19,22 The primary efficacy end point was a composite of recurrent symptomatic VTE, or VTE-related death. The primary safety end point was major bleeding.19,22

Of the 5244 patients who were evaluable for efficacy in the AMPLIFY trial, the mean age was 57 years.19 Overall, 59% of these patients were male and 83% were Caucasian. Approximately 90% of the patients had an unprovoked DVT or PE at baseline. The balance of patients with a provoked DVT or PE were required to have an additional ongoing risk factor, such as a previous episode of DVT or PE, immobilization, history of cancer, active cancer, and a known prothrombotic genotype.19

In the AMPLIFY-EXT trial, 2 doses of apixaban (2.5 mg and 5 mg orally twice daily) were compared with placebo in patients who had been treated for DVT and/or PE for 6 to 12 months with anticoagulant therapy without having a recurrent event.19,23 A total of 2486 patients were enrolled in the AMPLIFY-EXT trial, which involved 328 sites in 28 countries.23 The primary efficacy end point was symptomatic recurrent VTE or all-cause death, and the primary safety end point was major bleeding.19,23 Recurrent VTE included nonfatal PE and nonfatal DVT.19 Death was classified as VTE-related, cardiovascu­lar disease–related, bleeding-related, or as a result of other causes.23

Patients in the AMPLIFY trial were stratified according to their index event of PE (with or without DVT) or DVT (without PE), and the efficacy of apixaban in the initial treatment of VTE was consistent between these subgroups.19,22

In the AMPLIFY-EXT trial, both doses of apixaban were superior to placebo in the composite end point of symptomatic recurrent VTE (nonfatal DVT or nonfatal PE) or all-cause death.19,23 These data are summarized in Table 6.19

Safety
In the AMPLIFY trial, adverse reactions related to bleeding occurred in 15.6% of patients who received apixaban compared with 24.6% of patients who received enoxaparin plus warfar­in.19 The rates of discontinuation as a result of bleeding events were 0.7% in the apixaban group and 1.7% in the enoxaparin plus warfarin group.19

The AMPLIFY trial showed that apixaban was significantly superior to enoxaparin plus warfarin in the primary safety end point of major bleeding.19,22 The relative risk for major bleeding was 0.31 (95% confidence interval, 0.17-0.55; P <.001).19

The adverse reactions that occurred in ≥1% of patients in the AMPLIFY-EXT study included epistaxis, hematuria, hematoma, contusion, and gingival bleeding.19,23

Apixaban is contraindicated in patients with active pathologic bleeding and in patients who have had severe hypersensitivity reactions, including anaphylaxis, to apixaban.19

In addition, the boxed warning cautions about the risk for epidural or spinal hematoma. Patients who are receiving neuroaxial anesthesia or who are undergoing spinal puncture and are treated with antithrombotic agents for the prevention of VTE may develop hematomas (spinal or epidural) that can cause long-term or permanent paralysis. The postoperative use of indwelling epidural catheters or the concomitant use of other drugs that affect hemostasis may increase the risk for these events. Indwelling epidural or intrathecal catheters should not be removed until 24 hours after the last apixaban dose, and the next apixaban dose should be administered at least 5 hours after catheter removal.19

Furthermore, the discontinuation of apixaban in the absence of adequate alternative anticoagulation increases the risk for thrombotic events.19 In clinical trials that involved patients with atrial fibrillation, an increased rate of stroke was observed during the transition from apixaban to warfarin. If apixaban must be discontinued for a reason other than pathologic bleeding or the completion of a course of therapy, coverage with another anticoagulant should be considered.19

Bleeding
Apixaban can cause serious, potentially fatal bleeding.19 The concomitant use of drugs that affect hemostasis increases the risk for bleeding; these drugs include antiplatelet agents (eg, aspirin), anticoagulants, heparin, thrombolytic agents, selective serotonin reuptake inhibitors, serotonin norepinephrine reuptake inhibitors, and nonsteroidal anti-inflammatory drugs. Patients should be counseled about the signs and symptoms of blood loss and should be instructed to report them immediately or to visit an emergency department.19

Patients with active pathologic hemorrhaging should discontinue the use of apixaban.19 The anticoagulant effects of apixaban, which can be expected to persist for at least 24 hours after the last dose, cannot be reversed by any established method, and no specific antidote is available. Hemodialysis does not appear to have a substantial effect on apixaban exposure.19

Traumatic or repeated epidural or spinal puncture can increase the risk for hematoma.19 If traumatic puncture occurs, the administration of apixaban should be delayed for 48 hours. Patients should be frequently monitored for the signs and symptoms of neurologic impairment (eg, numbness or weakness of the legs, bowel, or bladder dysfunction).19

Pediatric use
The safety and effectiveness of apixaban have not been established in pediatric patients.19

Labor and delivery
The safety and efficacy of apixaban during labor and delivery have not been studied in clinical trials. The risks for bleeding and for stroke with apixaban use should be considered in this setting.19

Apixaban is an antithrombotic agent that selectively inhibits factor Xa to decrease thrombin generation and blood clot formation. Apixaban offers a safe, effective, and convenient oral alternative for patients undergoing total hip replacement surgery or total knee replacement surgery, patients who require treatment for VTE, and patients in whom prophylaxis is needed to reduce the risk for recurrent VTE after initial therapy. In addition, apixaban does not require routine coagulation testing and monitoring, which adds to its convenience. In clinical trials, apixaban had significantly lower rates of major bleeding events compared with enoxaparin plus warfarin, a serious concern in patients undergoing surgery, such as hip or knee replacement surgery.