The Role of Pneumococcal Vaccines in the Community Pharmacy

Streptococcus pneumoniae is a pneumococcal bacteria responsible for serious infections, including bacteremia and meningitis.1 S pneumoniae is also the leading cause of bacterial pneumonia, especially community-acquired pneumonia.1-3 These infections usually require immediate treatment, and can sometimes lead to hospitalization. Vaccines were developed as a way to help protect patients before they develop an infection. In the current age of medicine, vaccines are considered the primary form of prevention and prophylaxis for patients at risk for an infection, including patients at risk for pneumococcal infections.2,3

Currently, there are 2 vaccines that are used regularly in the community setting, which are recommended by the Advisory Committee on Immunization Practices (ACIP).4,5 PPSV23 is a 23-valent pneumococcal polysaccharide vaccine. The 23-valent refers to the 23 serotypes of S pneumoniae that it contains and protects the host from.6,7 Until recently, PPSV23 was the preferred, single-regimen vaccine used in adults aged >50 years who were at risk for a pneumococcal infection.5

As of December 2011, the recommendations for this patient population have been updated to include the second pneumococcal vaccine now seen more commonly in the community setting8; PCV13 is a 13-valent pneumococcal conjugate vaccine that became available in 2010, and has since been used for immunizing children.8,9 Similar to PPSV23, PCV13 contains multiple serotypes of S pneumoniae; however, it differs in that it only contains 13 serotypes compared with 23. See the Table for a list of the S pneumoniae serotypes PPSV23 and PCV13 can be used to immunize against.7,9 The difference in serotype coverage between the 2 vaccines is 1 serotype; although PCV13 contains fewer serotypes, it contains serotype 6A, which PPSV23 does not.5

For that reason, the recommendations for at-risk patients have been updated to include receiving both vaccines.4,5 This ensures that the patients are getting the maximum serotype immunity to help further decrease the risk for a pneumococcal infection. These vaccines protect patients against pneumonia, bacteremia, acute otitis media, as well as meningitis.1,2,5,7,9

PCV13 is administered as an intramuscular injection, and is indicated and recommended for children and older adults.9

In children aged 6 weeks through 5 years, it is given multiple times, at ages 2, 4, 6, and 12 to 15 months.9 In this patient population, it helps prevent otitis media as a result of a pneumococcal infection. As children continue to age, it is indicated that the PCV13 vaccine be given again between the ages 6 years through 17 years for protection against invasive infections.9

The final indication is for patients aged ≥50 years, to help immunize them against pneumonia and invasive infections9; this indication is the one most likely to be seen in the community setting.

Although PPSV23 offers more immunization coverage with the additional serotypes, it has fewer indications. PPSV23 can be administered intramuscularly or subcutaneously, and is recommended for patients aged ≥50 years, and patients aged ≥2 years who are at increased risk for a pneumococcal infection.6,7 These include patients with chronic obstructive pulmonary disease, diabetes mellitus, and any patient who is immunocompromised, such as transplant, oncology, asplenia, and human immunodeficiency virus patients.4

In August 2014, the Centers for Disease Control and Prevention released updated ACIP recommendations for administration scheduling of the 2 pneumococcal vaccines.4 The concern was centered on the serotype that PPSV23 was lacking, and PCV13 could provide. The recommendations are for patients who are immunocompromised, regardless of age, to receive the PCV13 vaccine followed by the PPSV23 vaccine 8 weeks later.4 Similarly, patients aged ≥2 years who are immunocompromised and have a history of cerebral spinal fluid leak, asplenia, or cochlear implants should also receive PCV13 followed by PPSV23 8 weeks later.4 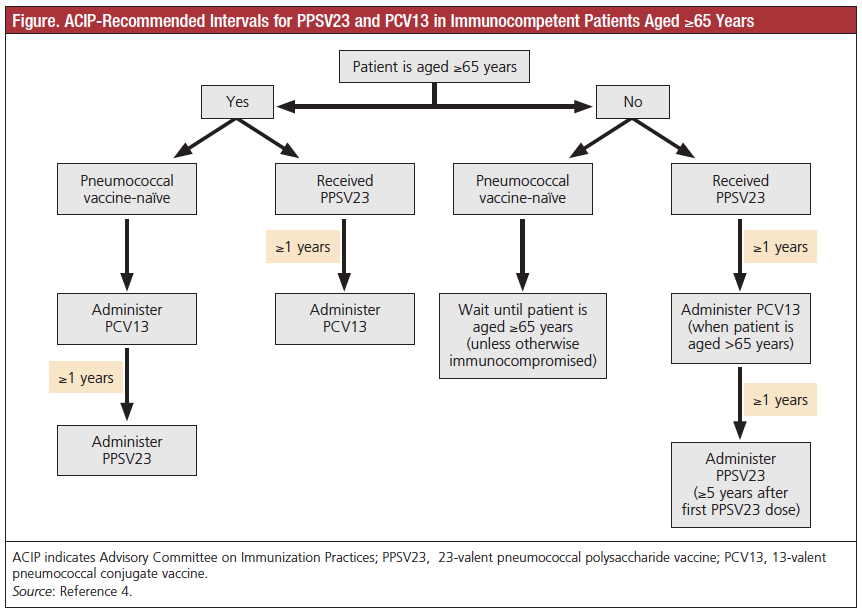 Oftentimes in the community setting, pharmacists have to administer multiple vaccines to an individual during a single visit. Doing this ensures that the patient receives the appropriate vaccinations needed for that year, and also saves the patient from making an additional trip.

The Infectious Diseases Society of America and American Thoracic Society’s consensus guidelines on the management of community-acquired pneumonia in adults recommend that patients keep up-to-date with their pneumococcal vaccines, in addition to their yearly influenza vaccines.3 This means that a community pharmacist may need to administer multiple vaccines, especially for someone who is not up-to-date with their vaccinations. Similar to knowing drug–drug interactions, it is also important to know about any potential interactions between vaccines.

PCV13, for example, is contraindicated in patients with an allergy to any of its components, or a prior allergic reaction to a diphtheria-toxoid–containing vaccine.9 In addition, PCV13 has decreased response in adults when given with the trivalent influenza vaccine, and both vaccines should therefore be separated by 4 weeks.9 Because PPSV23 has a decreased response when given with the herpes zoster vaccine, administration of these 2 vaccines should be separated by 4 weeks.7 These interactions should be taken into consideration when evaluating a patient for potential vaccinations.

Pneumococcal infections can present as a multitude of disease states, including bacteremia, and—more commonly—pneumonia. Patients aged ≥65 years are at an increased risk, as are those patients with immunocompromised states. For these patients, proactive prophylaxis is more beneficial than treating them after the disease occurs. Currently, PCV13 and PPSV23 are the recommended vaccines to be given to these at-risk patients. Community pharmacies are able to target these patients and potentially help them with immunizations to decrease their risks for developing a pneumococcal infection.