Symptom Overview
Hiccups are an under­reported respiratory complication that can sig­nificantly impair an individual’s quality of life. Responsible for at least 4000 hospital admissions annually, they often are not considered significant in the need to care for a patient’s other pressing comorbidities such as malignancy.1

Etiology
Hiccups occur secondary to an involuntary spasm of the diaphragm and intercostal muscles, which is followed by the sudden closure of the glottis generating the “hic” sound. These involuntary spasms occur at a rate of 4 to 60 per minute and predominantly involve the left hemidiaphragm.1 The pathogenesis of hiccups is complex with a variety of etiologies, resulting in the neurophysiologic effect of the condition (Table 1).1-4 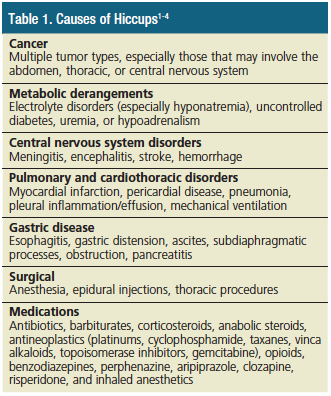 The hiccup reflex arc is composed of efferent and afferent limbs, as well as a central hiccup center. The nerves that are involved in this reflex include the vagus, phrenic, and elements of the sympathetic nervous chain—primarily in the thoracic region.1,5 This chain of nerves can be activated at multiple points, making the true cause of an individual’s hiccups hard to discern and treat. In addition, there is a male predominance of those with hiccups in most reports.1 Most hiccups are benign and self-limiting with cessation in minutes; however, some can last longer and become persistent or intractable hiccups, which are defined as lasting longer than 48 hours and 1 month, respectively.1,5

When diagnosing intractable hiccups, a careful physical and laboratory review should be performed to evaluate the myriad of possible causes. Intractable hiccups can result in anxiety, increased depression, sleep loss, impaired nutrition and fluid intake, aspiration, and induction of cardiac arrhythmias via activation of underlying cardiac pathology.1,5 This may result in significant impairment, and more rarely, death of the patient.

Treatment Options
Self-limited hiccups do not require intervention as they will generally resolve without causing significant distress. Although there is little scientific evidence to support their use, it is common for people to try a variety of nonpharmacologic interventions to resolve their hiccups. Common interventions include the pressure or stimulation of different body areas, sudden frightening experiences, ingestion of sugar or a glass of liquid, black pepper–induced sneezes, or breathing into a paper bag.1

Patients with persistent or intractable hiccups often require pharmacologic intervention to alleviate the condition or complications. The only US Food and Drug Administration–approved hiccup remedy is chlorpromazine, which may not be useful in many patients because of its associated side effects listed in Table 2.2,4-20 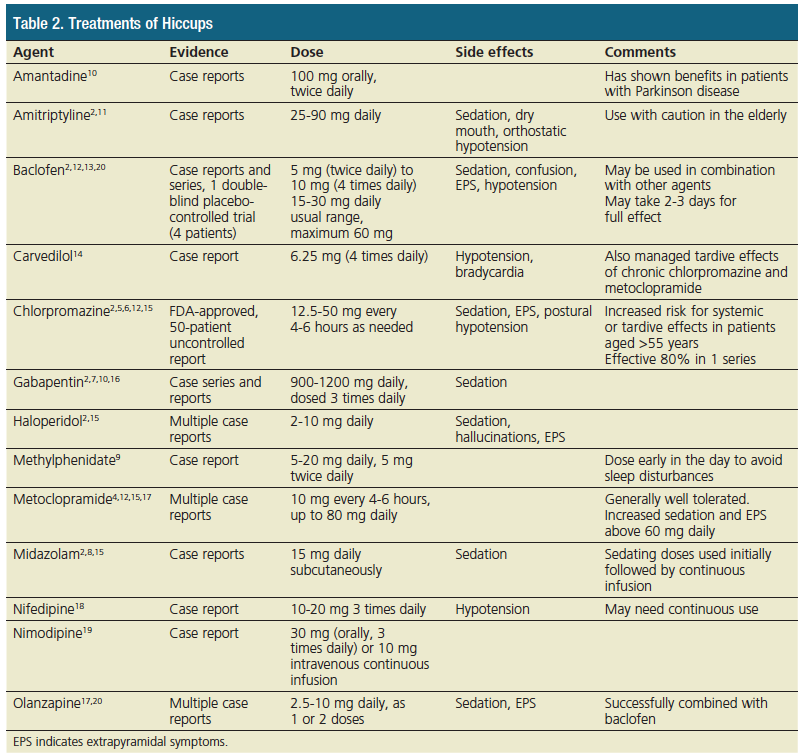 There are no randomized, adequately powered clinical trials to determine the efficacy of pharmaceuticals for the treatment of hiccups. Many agents have been tried, with anecdotal success, and are hypothesized to work via a variety of neural mechanisms to decrease the activity of irritated nerves via sodium, calcium, or gamma-aminobutyric acid (GABA)-enervated pathways (Table 2). Each agent has a different risk-to-benefit ratio, and when assessing which agent to use, it is important to consider the patient’s level of organ function, tolerance to side effects, and risk for drug interactions.

Older anticonvulsants such as phenytoin, valproic acid, and carbamazepine were previously used, but have largely been replaced with dopamine antagonists (eg, chlorpromazine, haloperidol, metoclopramide), GABA enhancers (baclofen, gabapentin), or calcium channel blockers (nifedipine, nimodipine). In severe cases, intravenous lidocaine, which blocks sodium channels, has been used to resolve postoperative hiccups, although this practice is limited because of the risk for cardiac side effects.1 Nebulized lidocaine has also been used in the palliative care setting to manage refractory hiccups.1 Although diazepam is a well-documented cause of hiccups, midazolam has been used to terminate hiccups and may be useful in the setting of terminal sedation or delirium.8 Methylphenidate may be useful to try in the sedated patient.6 Acupuncture has been an effective nonpharmacologic intervention in some patients, and the use of phrenic nerve blocks has been helpful in intractable hiccups.21 Multiple agents have been combined in attempts to manage hiccups with variable effects; however, the limiting factor is generally the additive side effects, especially sedation.20

Currently, there is little guidance on which agent should be used initially for hiccups of different etiologies. Because of the larger body of literature, most practitioners use chlorproma­zine, metoclopramide, or baclofen as the initial treatment modality; a trial of multiple single agents or combinations of agents is also common. Some practitioners believe that baclofen may be the most effective agent, although it is slower to take effect than other agents.2 Most agents are continued for several days after cessation of hiccups, then weaned off as tolerated. Some patients’ hiccups will recur, requiring the medication to be restarted. The goal is then to wean to the lowest effective dose.

In conclusion, although there are many reports of agents that help with the management of intractable hiccups, little current evidence exists regarding which agent, at what dose, and for which etiology should be used initially in patients. Agent and dose selection should be based on individual patient risks and comorbidities to achieve the best effect with minimal adverse consequences.