Melanoma, although not the most common skin cancer in the United States, is the most deadly.1

Based on data collected between 2004 and 2010, the 5-year survival rate for Americans with metastatic melanoma remains very low—only 16%—for all ages and races, and both sexes.2 The National Cancer Institute has estimated that 21.3 in 100,000 people will be diagnosed with melanoma of the skin in the United States in 2014.2 More than 9700 patients are estimated to die from melanoma in the same time frame.2

The incidence of melanoma is increasing in the United States, particularly among children and adolescents.2,3 An analysis of first-time melanoma diagnoses in patients aged 18 to 39 years between 1970 and 2009 showed that the incidence of melanoma increased 8-fold among young women and 4-fold among young men.3 A study analyzing data from 1973 to 2009 documented an average increase of 2% annually in melanoma in children aged between 0 and 19 years, particularly in girls and those aged between 15 and 19 years.4

These trends in melanoma diagnosis rates are concerning in light of their potential impact on healthcare resource consumption. An assessment of Medicare claims data from 1991 to 2005 demonstrated that patients with melanoma, particularly those with metastatic disease, utilize substantial healthcare resources.5 In this study, patients with metastatic melanoma consumed an average of more than $11,000 monthly in total healthcare costs, the majority of which was related to inpatient hospital services.5 Of note, this cost analysis was conducted before the new targeted therapies for metastatic melanoma became available.

Because tumor cells can spread to distant lymph nodes and to other organs, metastatic melanoma can be difficult to cure.6 Surgery and radiation therapy can be considered for tumors on the skin or for tumors that are localized to the lymph nodes. Metastases in internal organs can be surgically removed, depending on their number and location.6

Specifically, immune checkpoint blockade with immuno-oncology agents that are directed toward cytotoxic T-lymphocyte anti­gen (CTLA)-4 (eg, ip­i­limumab), as well as programmed death (PD)-1 and PD-ligand 1 (PD-L1), has emerged as a ­successful treatment ap­­proach.7 Ipilimumab was the first CTLA-4 inhibitor to demonstrate an overall survival benefit and durable objective responses in patients with metastatic melanoma.7

To increase the number of patients with melanoma who benefit from durable responses with immunotherapy, researchers are exploring potential synergies between immune checkpoint inhibitors that target CTLA-4, PD-1, and PD-L1, and kinase-targeted therapies, as well as the concurrent and sequential use of CTLA-4 and PD-1/PD-L1 inhibitors.7

On September 4, 2014, the US Food and Drug Administration (FDA) approved pembrolizumab (Keytruda; Merck Sharp & Dohme Corp) for the treatment of patients with unresectable or metastatic melanoma and disease progression after receiving ipilimumab and, in pa­tients with BRAF V600 mutation melanoma, a BRAF inhibitor.8 Pembro­lizumab is the first human PD-1–blocking antibody approved for use in the United States.9

Pembrolizumab, which is administered via intravenous infusion, was approved under the accelerated approval program based on surrogate end points of confirmed overall response rate (ORR) and duration of response.8 Improvements in survival or disease-related symptoms have not yet been established.10

According to Jeffrey S. Weber, MD, PhD, ­Director of the Donald A. Adam Comprehensive Mel­anoma Research Cen­ter of Excellence at the Moffitt Cancer Center, Tampa, FL, “Pembrolizu­mab is…a clearly effective drug that will prolong survival for many patients with metastatic melanoma. This approval is a real advance and a major milestone in the treatment of the disease.”11

As a condition for this accelerated approval, the manufacturer is required to conduct a multicenter, randomized trial to establish the superiority of pembrolizumab over standard therapy and to verify its clinical benefit in patients with metastatic melanoma.8 Currently, 2 ongoing multicenter, randomized, controlled, therapeutic con­­firmatory trials are under way in patients with metastatic melanoma: Trial P002 in ipilimumab-refractory patients and Trial P006 in ipilimumab-naïve patients. In both trials, the coprimary end points are progression-free survival and overall survival.8

Pembrolizumab is a mono­clonal antibody that binds to the PD-1 receptor and blocks interaction with its ligands, PD-L1 and PD-L2. This binding results in the activation of T-cell–mediated immune responses against tumor cells. Blocking PD-1 activity resulted in de­­creased tumor growth in genetically identical mouse tumor models.10

The recommended dosage of pembrolizumab is 2 mg/kg administered as an intravenous infusion over 30 minutes every 3 weeks; it should be reconstituted and diluted before infusion. Pembrolizumab should be used until disease progression or until unacceptable toxicity.10

The accelerated approval of pembrolizumab was based on the results of a multicenter, open-label, randomized, dose-comparative, activity-estimating cohort conducted within the phase 1b KEYNOTE-001 trial (Trial P001).10 Of the 411 patients with treatment-naïve or with previously treated unresectable or metastatic mela­­noma who enrolled in the KEY­NOTE-001 trial, 173 had disease progression within 24 weeks of the last dose of ipilimumab and, in those with BRAF V600 mutation melanoma, after previous treatment with a BRAF inhibitor. These 173 patients were random­ized to receive 2 mg/kg (N = 89) or 10 mg/kg (N = 84) of intravenous pembrolizumab once every 3 weeks until disease progression or until unacceptable toxicity.10

Patient Population
Among the 173 pa­tients with previously treated unresectable or metastatic melanoma in KEYNOTE-001, the median age was 61 years (61% were aged <65 years).10 Most patients were male (60%) and white (97%). All of the patients in the trial had an Eastern Cooperative Oncology Group performance status of 0 or 1. The patients’ disease characteristics in­cluded stage M1c (82%), having had ≥2 previous therapies for advanced or metastatic disease (73%), elevated lactate dehydro­genase (39%), BRAF V600 mutation (17%), and brain metastases (9%).10

Efficacy
The ORR associated with 2-mg/kg pembroliz­umab was 24% (95% confidence interval, 15%-34%) in patients with unresectable or metastatic melanoma who were previously treated with ipi­limumab and, if relevant, a BRAF inhibitor.10

Safety
The cohort of 89 patients with previously treated unresectable or metastatic melanoma in KEYNOTE-001 who re­ceived pembrolizumab (2 mg/kg) had a median of 9 doses (range, 1-23 doses).10 The median duration of exposure for this cohort was 6.2 months (range, 1 day-15.3 months). Of these 89 patients, 51% were exposed to pembroliz­umab for >6 months, and 21% were exposed for >1 year.10 The Table summarizes the adverse reactions that occurred in ≥10% of patients in this cohort. 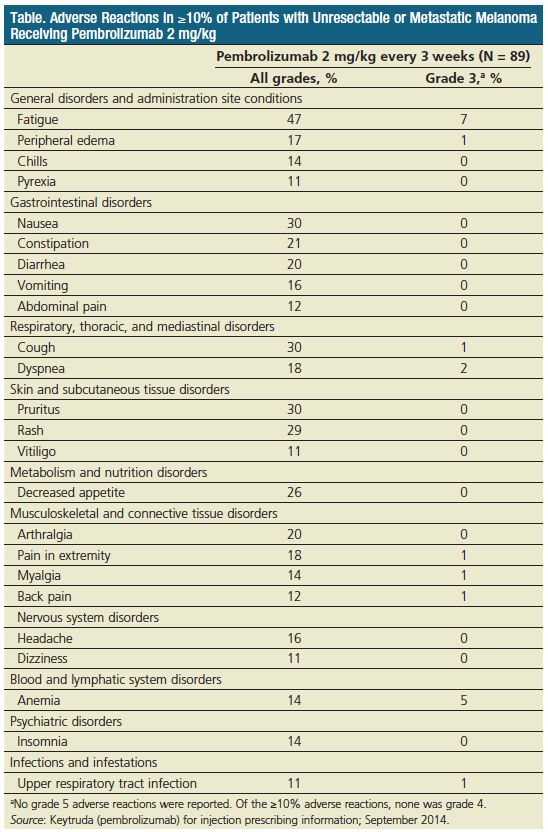 Pembrolizumab was discontinued because of ad­verse reactions in 9% of the 411 patients receiving 2-mg/kg or 10-mg/kg doses in KEYNOTE-001. Among the 89 patients with unresectable or metastatic melanoma who received 2 mg/kg of pembrolizumab, the discontinuation rate associated with adverse reactions was 6%.

The adverse reactions that led to the discontinuation of pembrolizu­mab included pneumonitis, renal failure, and pain.10

Pembrolizumab has no contraindications.

Immune-mediated colitis
Colitis, including microscopic colitis, occurred in 4 of the 411 patients in the KEY­NOTE-001 trial. Grades 2 and 3 colitis were observed in 1 and 2 patients, respectively. The median time to onset of colitis was 6.5 months (range, 2.3-9.8 months). All 3 patients with grade 2 or 3 colitis were treated with high-dose corticosteroids followed by a corticosteroid taper. One patient permanently discontinued pembrolizumab as a result of colitis. All 4 patients with colitis experienced complete resolution of the condition.10

Immune-mediated hepatitis
In the KEY­NOTE-001 trial, hepatitis, including autoimmune hepatitis, occurred in 2 of the 411 patients, including 1 patient with grade 4 hepatitis. The time to onset was 22 days after initiating pembrolizumab for the patient with grade 4 hepatitis. This patient permanently discontinued pembrolizumab and was treated with high-dose systemic corticosteroids followed by a corticosteroid taper. Both patients with hepatitis experienced complete resolution of the event.10

Patients receiving pembrolizumab should be monitored for changes in liver function. Cortico­steroids should be administered for grade ≥2 hepatitis. Pembro­lizumab should be withheld or discontinued based on the severity of liver enzyme elevations.10

Immune-mediated hypophysitis
Inflam­mation of the pituitary gland (hypophysitis) oc­­curred in 2 of the 411 patients in the KEY­NOTE-001 trial. One of these events was grade 2 and 1 was grade 4. The time to onset was 1.3 months for the patient with grade 2 hypophysitis and 1.7 months for the patient with grade 4 hypo­physitis. Both pa­tients were treated with high-dose corticosteroids followed by a corticosteroid taper and continued receiving physiologic replacement doses of glucocorticoids.10

All 3 patients with nephritis fully recovered their kidney function after treatment with high-dose corticosteroids followed by a corticosteroid taper.10

Patients receiving pembrolizumab should be monitored for changes in renal function. Cortico­steroids should be administered for grade ≥2 nephritis. Pembro­lizumab should be withheld for moderate (grade 2) nephritis and should be permanently discontinued for severe (grade 3) or life-threatening (grade 4) nephritis.10

Hypothyroidism occurred in 34 (8.3%) of the 411 patients who re­ceived pembrolizumab in the KEYNOTE-001 trial. The median time to the onset of hypothyroidism was 3.5 months (range, 5 days-19 months). All but 2 patients with hypo­thyroidism were treated with long-term thyroid hormone replacement therapy. The other 2 pa­tients required short-term thyroid hormone replacement therapy. None of the patients received corticosteroids or discontinued pembrolizumab secondary to hypothyroidism.10

Because thyroid disorders can occur at any ­time during treatment with pembrolizumab, patients should be monitored for changes in thyroid function at the initiation of treatment, periodically during treatment, and as indicated based on clinical evaluation.10

Isolated hypothyroidism can be managed with thyroid hormone replacement therapy without treatment interruption and without corticosteroids. Cortico­steroids should be administered for grade ≥3 hyperthyroidism. Pembrolizumab should be withheld for severe (grade 3) hyperthyroidism and should be permanently discontinued for life-threatening (grade 4) hyperthyroidism.10

If an immune-mediated adverse reaction is ­suspected, patients receiving pembrolizumab must be evaluated to exclude other causes. Pembro­lizumab should be withheld and corticosteroids should be administered based on the severity of the reaction. Upon im­­provement of the reaction to grade ≤1, a corticosteroid taper can be initiated and continued for at least 1 month.10

Embryofetal toxicity
Pembroliz­umab may cause fetal harm when administered to a pregnant woman. If pembrolizumab is used during pregnancy, or if a patient becomes pregnant while taking the drug, she should be made aware of the potential hazard to the fetus. Women of childbearing age should use effective contraception during treatment with pembrolizu­mab and for at least 4 months after the last dose of the drug.10

Geriatric use
Of the 411 patients with relapsed unresectable or metastatic melanoma who received pembroliz­umab, 39% were aged ≥65 years. No meaningful differences in efficacy were observed among the age cohorts.10

Pregnancy
Pembro­lizumab has been assigned pregnancy category D. Women should avoid becoming pregnant while being treated with pembrolizumab.10

Nursing mothers
Nursing should be discontinued during treatment with pembrolizumab.10

Pembrolizumab, the first FDA­ approved PD-1 inhibitor, is a safe and effective immunotherapy for patients with unresectable or metastatic melanoma and disease progression after ipilimumab and, if BRAF V600 mutation melanoma, after a BRAF inhibitor.

The FDA approved pembrolizumab under its accelerated approval program based on tumor response rate and duration of response data. As a condition of this accelerated approval, the FDA required that a multicenter, randomized trial be conducted to establish pembrolizu­mab’s survival superiority over standard therapy, and to verify its clinical benefit in patients with metastatic melanoma.8

The 2 ongoing trials of pembroliz­umab, Trial P002 in ipilimumab-refractory patients and Trial P006 in ipilimumab-naïve patients, are currently investigating the potential survival benefit with pembrolizumab in patients with advanced melanoma.

The safety and efficacy of pembro­lizumab are also being evaluated in other solid and liquid tumors, including advanced non–small-cell lung cancer, renal-cell carcinoma, recurrent head and neck cancer, and multiple myeloma.13