For many years, healthcare professionals have advocated for people to receive the influenza vaccine annually. Commonly regarded as the flu, the influenza virus is a vaccine-preventable disease. According to the Centers for Disease Control and Prevention (CDC), influenza and pneumonia were the eighth leading causes of death in the United States in 2011.1

The efficacy of the influenza vaccination exceeds 80% in healthy people aged <65 years, when there is a good match between the vaccine strain and the circulating strain of the influenza virus.3 Although the vaccine is not as effective in patients aged >65 years, it has been shown to significantly reduce severe complications and mortality in this patient population.

For the 2014-2015 season, the Advisory Committee on Immunization Practices recommended that all persons aged ≥6 months receive the vaccine unless contraindications were present.4 Since 2010, the US Department of Health & Human Services has established influenza vaccination goals within the Healthy People 2020 initiative. The objective of this initiative is to increase immunization rates and reduce preventable diseases.5 A target vaccination rate of 80% has been set for noninstitutionalized adults aged 18 to 64 years by the year 2020; this goal far exceeds the baseline of 24.9% assessed in 2008.

The Role of Healthcare Providers

Although there has been an increase in influenza vaccine administration, there are still barriers associated with patients’ reluctance to receive the vaccine, including fear of contracting influenza from the vaccine, fear of adverse reactions, and a fear of pain from injections or needles.8 In addition, reduced consumer-initiated visits to providers—and failure from providers to recommend influenza vaccinations—have long contributed to lower rates, especially in minority populations.9

As we, as a nation, aim to reach our Healthy People 2020 influenza vaccination goal, it is essential that we continue to research and identify barriers, and develop strategies to address them. Although it is challenging to identify an individual’s personal barriers, any information yielded from research on this subject could prove vital to helping our nation achieve its goal.

Based on trends seen firsthand, we believe that some of the barriers to vaccination could be related to cost, access to the vaccine, or myths surrounding the virus or vaccine. To identify strategies to increase influenza immunization and better understand barriers to vac­cination, we surveyed patients regarding the reasons for and against receiving the vaccination.

The survey consisted of 15 questions compiled from trends we observed in our practice. Of these questions, 5 sought patient demographics and 10 were opinion-based (Figure 1). 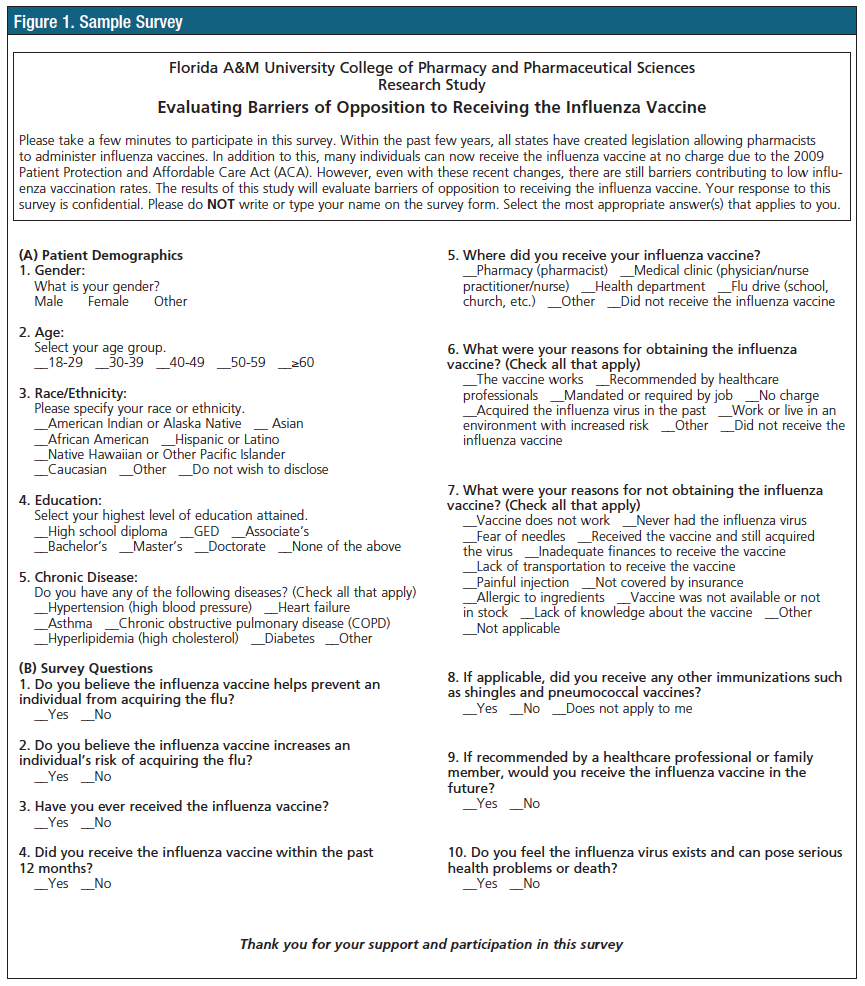 After receiving Institutional Review Board approval, surveys were sent to various participants (>18 years) chosen randomly based on patient availability within different local communities. Each participant was provided a survey via an electronic link in an email, or as hard copy. By participating in the study, respondents provided implied or verbal consent. No personal information was retrieved from participants during the study.

Of the 81 participants, 58 were women, and 23 were men (Table). Approximately, 67.1% self-identified as African American and 23.3% self-identified as Caucasian. In addition, 45.1% reported that their highest level of educational attainment was a high school diploma and 19.5%, an associate’s degree. 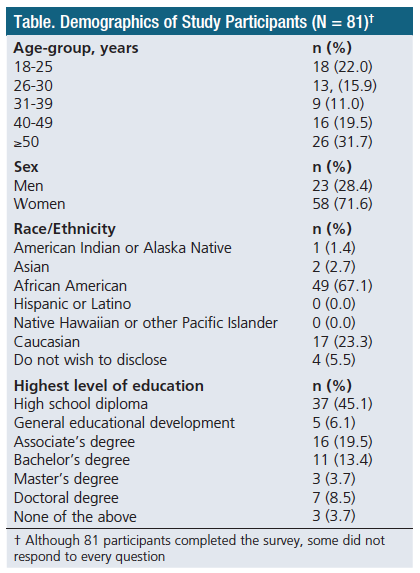 Among the participants who completed the survey, 72% believed that the influenza vaccine is effective in preventing the flu virus. Twenty-eight percent did not believe the vaccine is effective. On the other hand, when asked whether the vaccine increases a person’s risk for the flu, 32.9% agreed and 67.1% disagreed. More than 55% of participants reported that they received the influenza vaccine during the 2013-2014 flu season, whereas 45% responded that they had not. Twenty-one percent of those who received the vaccine received it from a medical clinic, and 18.5% received it from a pharmacist.

When asked to select from the following possible reasons for why they chose to receive the vaccine, 28.4% of the patients reported following the recommendation of a healthcare professional (Figure 2). Eighteen and one-half percent reported believing that the vaccine is effective; this group of patients also reported living and working in an environment that increases their risk for acquiring the virus. Of the possible reasons listed that may have prevented a participant from receiving the vaccine, never having the virus was reported by 13.8% of study participants as the reason they chose not to receive the vaccine (Figure 3). 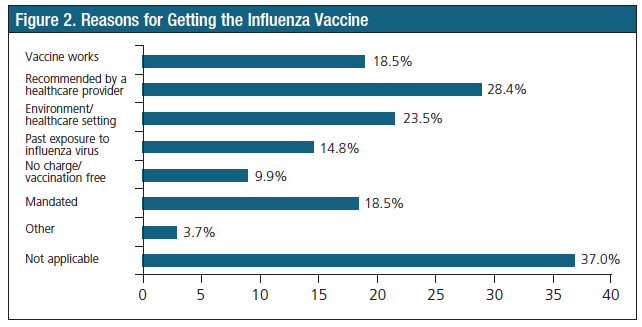 Lastly, survey results indicated that >71% would obtain the vaccine if it were recommended by a healthcare professional. Interestingly, 64.2% of study participants reported believing that if they got the flu, it could have serious consequences, including death.

Possible Barriers to the Influenza Vaccine

We sought to determine possible barriers to influenza vaccination, and were surprised to find that these barriers went beyond access, cost, and misconceptions. The study also demonstrated that the barriers were associated with health literacy, lack of recommendations from providers, and lack of patient understanding regarding the severity of influenza.

We also found that 64.2% of participants did not believe that the influenza virus could be fatal. Data from the study suggest that participants do not understand the consequences that can occur if they acquire the virus. Although 72% of participants reported believing the vaccine is effective, many did not understand the severity of the virus, and, therefore, did not feel the need to receive it. The NAAL health literacy component suggests that adults with below basic or basic health literacy are less likely than adults with higher health literacy to get information about health issues from written sources (newspapers, magazines, books, brochures, or the Internet), and more likely than adults with higher health literacy receive information about health issues from radio and television broadcasts.10 As America continues to work on improving health literacy, additional steps can be taken to alleviate barriers and increase influenza vaccination rates.

Low literacy and health literature quickly became evident during the course of the study. A large percentage of completed surveys were obtained in person at a local retail pharmacy. When individuals were asked to participate, many said no despite the fact that they were waiting in the pharmacy area for prescriptions. It was quickly determined that many individuals’ reluctance to participate was associated with their inability to read; this was not an initial barrier we suspected. However, to address this issue, participants were offered assistance with completing the survey. Many agreed to participate in the survey with the assistance provided, which included reading the question and answer selections slowly and clearly. In addition, any words or terms that may have caused confusion were defined for the patient. This should be taken into consideration in future studies.

In addition, although this study sought to evaluate barriers to influenza vaccination among a random group of patients in the community, an overwhelming majority of the participants were African American and did not represent the diverse ethnic makeup of the American population. The study period was also short, spanning approximately 2 months, and did not yield the desired amount of surveys completed for data collection. We were also unable to track the number of surveys distributed, because we relied on word of mouth and organizations with large community involvement. Lastly, hard-copy data collection was transposed to electronic format by hand, which has the potential for human error.

Healthcare professionals are encouraged to convey the benefits of obtaining the influenza vaccination to patients and members of their community. It has often been concluded that lower influenza vaccination rates may be attributed to the availability and cost of influenza vaccines, personal beliefs, and influenza myths. Although this study did not specifically narrow down the exact barrier, it did yield pertinent information to help address the issue. This study showed that although many individuals believe in the overall effectiveness of the influenza vaccine, many patients do not understand the risks associated with not getting vaccinated and acquiring the flu.

Given the patient demographics and educational attainment of many of the participants of this study, it can be speculated that educational and economic levels may be a barrier to patients not receiving the vaccine. This information is vital because it not only provides insight into possible barriers for influenza vaccination, but also demonstrates a potential opportunity for pharmacists, and other healthcare professionals to develop strategies that specifically target individuals from specific economic and educational levels.

Active dialogue from healthcare professionals can contribute to increasing influenza vaccination rates. Often, information advocating for influenza vaccination is provided to patients in the form of newsletters and brochures. However, in most cases, the information is never explained because of time constraints, leaving the patient confused and not actively engaged in their own health.

Approximately 71% of the study participants reported that they would get the vaccine if it were recommended by a healthcare professional. These findings are congruent with previous data reported by the CDC during the 2013-2014 season, and suggest that individuals trust their healthcare professionals and will listen to their recommendations. Media campaigns using television and radio can positively impact influenza vaccination rates as well as social media websites such as Facebook and Twitter. These campaigns should advocate for vaccination and also provide information on possible consequences of not acquiring the vaccine.

Lastly, the data showed the need to develop and implement vaccination teams that target minority communities and other reported areas with low influenza vaccination rates. These teams should consist of various healthcare professionals (eg, nurses, physicians, pharmacists), civic leaders, and religious leaders from within these communities who understand and can relate to people in the community. These teams should also provide education and information on where to receive the vaccine. Follow-up visits and phone calls should be completed to ensure individuals have every opportunity to become vaccinated.

As with anything else, data should be collected and analyzed to determine and address areas of success and needs for improvement for best practices.

In addition, media campaigns and vaccination teams can help reach underserved populations, as well as patients who may not be in contact with a healthcare professional (eg, a physician or pharmacist). Although influenza vaccination rates have improved, there is still much work that needs to be done to reach the goal of 80% vaccination rate by 2020.

This study was presented at the American So­ciety of Health-System Pharmacists 2014 Midyear Clinical Meeting and Exhibition; December 7-11, 2014; Anaheim, CA.