Influenza Vaccinations: Which Vaccine Is Best for Your Patient?

Everyone should receive the influenza (flu) vaccine, but which one? Since the 2010-2011 flu season, the Advisory Com­mittee on Immunization Practices (ACIP) has recommended universal influenza vaccinations for all persons aged ≥6 months who do not have vaccine contraindications.1

However, the proliferation of different influenza vaccination options made available in recent years has also created considerable confusion. This article addresses this concern, and provides information about which vaccines should be used for your patients. Many new vaccines have been approved by the US Food and Drug Administration in the past 5 years, and most physicians, clinicians, and retail pharmacists may lack familiarity with the new options.

Traditional flu vaccines have been trivalent, containing 2 influenza A strains and 1 influenza B strain, and selected based on the previous year’s predominant flu types. Because of antigenic drift, the match is better some years than others; unfortunately, last year’s vaccine missed the target.2

Although ACIP has not made a recommendation, it seems logical to prefer the more expensive quadrivalent option when available, because approximately 42% of all influenza B infections (in Finland) between 1999 and 2012 were caused by viruses not included in the trivalent vaccine.5 However, the Centers for Disease Control and Prevention does not recommend delaying influenza vaccination when the quadrivalent option is not immediately available. Trivalent vaccines are gradually being phased out, although Sanofi Pasteur SA will continue to market trivalent Fluzone (along with the quadrivalent version), and the new cell culture–based vaccines are still trivalent.3,6 For a complete list of all the current vaccines, dosages, indications, and manufacturing information see the Table. 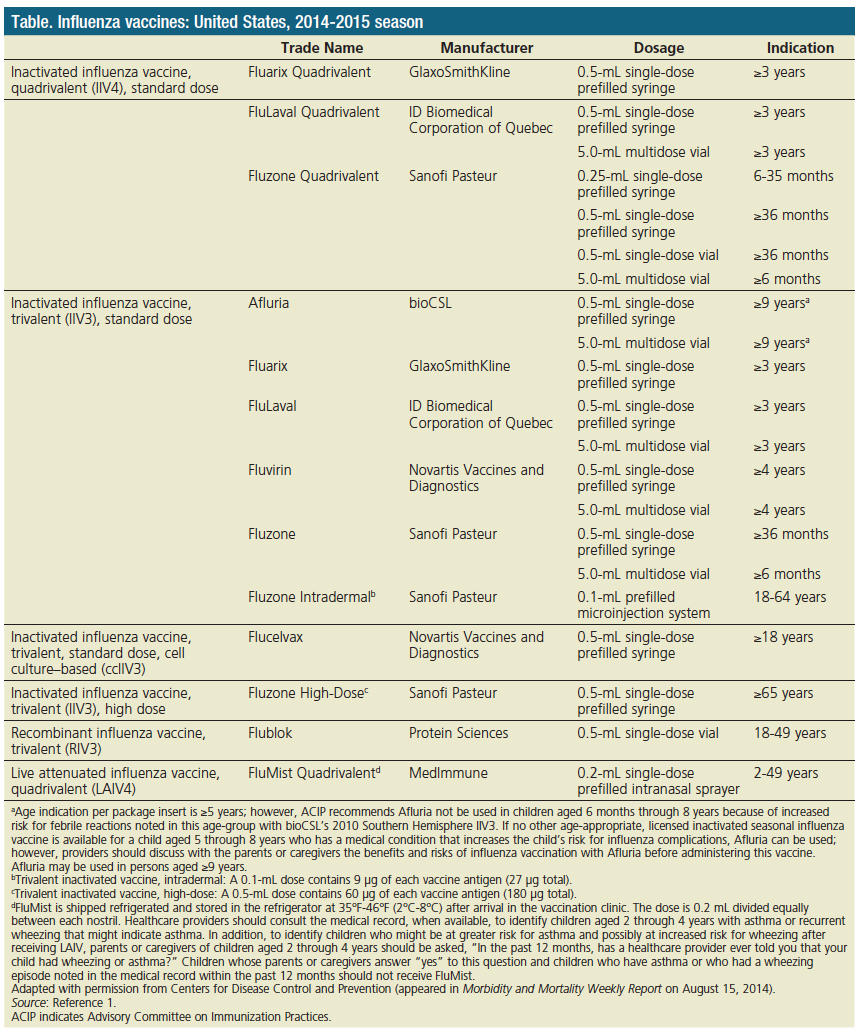 LAIV (FluMist) is now available as a quadrivalent formulation approved for patients aged 2 to 49 years.1 It is contraindicated outside these age ranges in patients who are pregnant, immunosuppressed (and their caregivers), or who have egg allergies, and for children aged 2 to 4 years with asthma.

ACIP recommends LAIV for children aged 2 to 8 years1 because it appears to be significantly more effective than IIVs, resulting in an approximately 55% flu case reduction.8 LAIV is also an excellent choice for needle-phobic patients. IIVs should still be used in children if LAIVs are not available; vaccination should not be postponed if the preferred vaccine is unavailable.1 Infants and children aged 6 months through 8 years getting their first flu shot require 2 doses given ≥4 weeks apart. Infants and children aged 6 to 35 months get 0.25-mL IIVs. Children aged >24 months receive the same LAIV dose (0.2 mL) as adults.

High-dose trivalent vaccines (Fluzone High-Dose) are now available for patients aged ≥65 years.1 Each 0.5-mL dose contains 60 μg of each vaccine antigen rather than the usual 15 μg, providing a superior, longer-lasting immune response. When available, this vaccine should be considered a best treatment option for elderly patients. As of yet, there is no quadrivalent high-dose option, and the increased antigen dose carries an increased risk of local reactions.

There is also a low-dose trivalent Intradermal flu vaccine (Fluzone Intradermal) that uses an ultrafine needle and one-fifth the usual amount of antigen (0.1 mL). A quadrivalent form will be available for the 2015-2016 flu season.

Two new trivalent flu vaccines have been produced without the use of eggs, both approved only for adults aged ≥18 years.1 Flucelvax is a cell culture–derived IIV that contains only trace amounts of ovalbumin. Flublok is a recombinant influenza vaccine (RIV3) developed from insect ovary cells, and thus contains no ovalbumin.9 Baculovirus, a virus specific to insects, is genetically modified to rapidly produce large amounts of necessary hemagglutinins. Unlike all the other vaccines, Flublok contains only hemagglutinin antigens.10 It is approximately 45% effective against all influenza types, regardless of vaccine mismatches with circulating strains.10 Obviously, the immediate advantage of both vaccines is their safety as it pertains to patients with egg allergies. By avoiding the use of eggs, they also reduce the lengthy vaccine production process from 6 months to 2 months.

Most patients with egg allergies—even those who have developed hives after egg exposure—will probably tolerate egg-based IIVs, unless they have a history of anaphylaxis.1 However, patients should be observed for ≥30 minutes postvaccination in an environment where immediate resuscitation is available. Patients aged 18 through 49 years with a history of egg allergy–related anaphylaxis should receive RIV3. Of course, severe allergic reactions to influenza vaccines should preclude revaccination.

The future of flu vaccination appears to point to cell culture or recombinant vaccines that can be manufactured quickly, provide broad coverage, and be safe and well-tolerated.11

Researchers in Israel are trying to develop a common epitope flu vaccine that will produce antibodies common to all flu viruses, making seasonal mismatches a problem of the past. The addition of adjuvants to flu vaccines may prolong the duration of immunity.

The search continues for a universal flu vaccine that is able to meet the many challenges posed by this protean virus.