Biosimilars: A Review of the Pathways and Barriers to Success

In March 2015, the US Food and Drug Administration (FDA) approved filgrastim-sndz (Zarxio), a biosimilar to filgrastim (Neupogen), representing the first biosimilar in the United States.1 This marked a significant win for the FDA, which has faced a great deal of criticism for its handling of biosimilars.2 Adding to the momentum, infliximab-dyyb (Inflectra), a biosimilar to infliximab (Remicade), was approved in April 2016,3 and over the course of 2 days in July 2016, 2 separate biosimilars were recommended for approval by an FDA advisory panel.4,5 The first was ABP 501, a biosimilar to adalimumab (Humira),4 and the second was a biosimilar to etanercept (Enbrel).5 These 2 drugs (adalimumab and etanercept) alone represent approximately $24 billion in sales in 2015.6

Such high figures may suggest hefty cost-savings on the horizon; however, remaining barriers need to be addressed before the full potential of this market can be achieved. New-to-market generics increase access to medications through cost-savings, and biosimilars may be no different. Patients, providers, and payers need more treatment options, and pharmacists play a key role in managing the educational barriers between these key stakeholders. It is crucial to understand the market these biosimilars are about to enter.

The IMS Institute for Healthcare Informatics recently published their annual report, Medicines Use and Spending in the U.S., which showed that spending increased by approximately 12% from 2014 to 2015, reaching $425 billion in 2015, and will approach up to $640 billion by the year 2020.7 The global biologics marketplace is projected to grow in excess of $390 billion by 2020, accounting for approximately 28% of the global pharmaceutical market.8 In addition, the specialty “submarket” grew by >20% from 2014 to 2015, while the average net price of branded drugs has increased by 2.8%.7

With the market signaling no intentions of slowing down, payers have been diligently working to constrain costs in the face of increasing prices, including “brand-protected” price hikes.9 As prices continue to rise, the global pharmaceutical industry is a major target for foreign and domestic healthcare systems. For example, France has targeted healthcare savings of €1580 million in relation to pharmaceutical markets that must be achieved.2 To address this issue, providers need more treatment options, signaling a major opportunity for biosimilars. Approximately 50 biosimilars are in development that are poised to reduce the pricing of specialty medications,8 and although these agents have been affecting foreign economies for nearly a decade, they have just recently been introduced into the US market that is dominated by high-cost branded medications.2

Although innovation is essential to enhancing patient care, biosimilars can surely fill a need by expanding patient access to medications, as well as by potentially driving even more innovation through increased competition. With appropriate guidelines and proper education, these agents are primed to cause significant market disruption; however, barriers within the current approval pathway will continue to constrain their use, if these barriers are not addressed.

It took the FDA until March 2015 to approve filgrastim-sndz, the first biosimilar in the United States.1 Although this marks a major milestone for the US market, the European Medicines Agency (EMA) has had an established approval pathway for biosimilars since 2003, with the first biosimilar receiving approval in 2006, and an additional 22 biosimilars approved by the EMA since then.10,11

The Biologics Price Competition and Innovation Act was passed into law in 2010, as part of the Affordable Care Act.1,10 The passing of this legislation created a new approval pathway—often referred to as the 351(k) pathway—for getting biosimilars to the US market. The process for approval is different from the traditional pathway for small-molecule generics; it should further be noted that biosimilars are not considered generics.10

As noted earlier, the FDA has approved 2 biosimilars so far,1,3 the most recent being infliximab-dyyb.3 It is understood that these agents can be used for the treatment of the same indications as their reference drugs; however, these drugs have not received the designation of being interchangeable, which will likely play a major role in market uptake.1,3

Within the 351(k) pathway, an interchangeable biologic is a biosimilar that is expected to achieve the same clinical result as the reference drug when substituted.12 According to the FDA, “To be determined to be an interchangeable biological product, it must be shown that for a biological product that is administered more than once to an individual the risk in terms of safety or diminished efficacy of alternating or switching between use of the biological product and the reference product is not greater than the risk of using the reference product without such alternation or switch.”12 The issue is that although the FDA must determine interchangeability, the FDA has yet to establish guidelines for interchangeability within the biosimilar pathway.2 In other words, manufacturers cannot submit clinical trial data for interchangeability because the FDA has yet to release such guidelines. For example, the FDA’s Purple Book of biologics lists a designation of biosimilar for infliximab-dyyb and filgrastim-sndz, but this does not include interchangeable (Table 1).13 This means that neither of these drugs can automatically be substituted for their reference drug at the pharmacy level. This is key to understanding why the immediate impact of a biosimilar is different from that of a generic drug.

Although eager to expand the treatment options, payers may be hesitant to add the approved biosimilars to their formularies without appropriate data, and providers may see them as a completely different medication. To be designated as interchangeable would be a significant win for any drug when penetrating a market.

By contrast, the EMA does not address interchangeability in its guidelines, leading to varying acceptance decisions among different European countries with regard to biosimilars.2 As a result, this has potentially limited the overall impact of biosimilars across Europe, because of inconsistency among countries and a lack of understanding among prescribers. For example, in Ireland, it is acceptable to make a patient switch to a biosimilar, although multiple substitutions are not allowed, whereas in Denmark all biosimilars are said to be interchangeable unless proved otherwise.8 Although foreign markets have varied greatly in acceptance, a competitive US market paints a picture of opportunity for expanded access to biosimilars.

With an obvious opportunity for cost-containment, payers and benefit managers alike have been very critical of the FDA’s drawn-out process for setting standards around biosimilars. Payers, continuing to manage the challenge of prescription costs, would like to accelerate the uptake of cheaper alternatives, and in turn expand patient access to biosimilars. In Express Scripts 2015 Drug Trend Report Executive Summary, benefit managers estimated that biosimilars could offer the United States potential savings of $39 billion over the next 3 years, and $250 billion over the next decade.2,14 However, so far only 2 biosimilars are available in the US market.2 Reports published by Express Scripts in 2015 estimated savings based on patent expirations and biosimilar discounts at 20% to 30%15; however, filgrastim-sndz hit the market in September 2015 at a discounted price of approximately 15% compared with its reference drug.16

That does not mean it has not affected the market; within its first 4 months on the market, filgrastim-sndz played a role in decreasing Amgen’s (Neupogen’s manufacturer) market share by 24%—although this can also be attributed to the approval of and the increased competition from tbo-filgastrim (Granix).17

Still, the 15% discount rate differs greatly from the 80% to 90% discount realized when generics are brought to market; but a 15% discount on a biologic could offer substantially more savings than an 80% discount on a nonspecialty medication, simply because of the average prescription costs.

A great example of cost-containment and enhanced access is that of filgrastim in the United Kingdom, which was recently highlighted in a publication from the IMS Institute for Healthcare Informatics.8 After the launch of the first filgrastim biosimilar in 2008, multiple Strategic Health Authorities in England updated their treatment guidelines to include data comparing the cost-effectiveness of filgrastim and its biosimilar; the biosimilar was then added as a first-line therapy in cancer treatment.8 As a result, the use of the originator and the biosimilar increased by 104%.

Recently, CVS Health announced that it will be removing an insulin glargine injection (Lantus) from its 2017 formulary and replacing it with a different insulin glargine injection (Basaglar).18 This action by CVS Health serves as a preface to how biosimilars are primed to affect the market; although Basaglar is not designated as a biosimilar in the United States as it is in Europe, the drug is set to test the waters of the biosimilar market.19 Lantus is by far one of the most, if not the most significant agent to be removed from payers’ formularies, and it should be expected that drugs of similar market value will continue to be targeted by manufacturers for biosimilar development, and by payers to replace agents on their list of formularies.

Other markets, including that of Europe, have established a much greater foundation for biosimilars than the United States. However, overall acceptance of biosimilars has been burdened, and can vary extremely by country for a variety of reasons, including inconsistent rules of interchangeability and a lack of provider education. Although it is too early to predict exactly how biosimilars will affect the US market, there will be no shortage of opportunity for these agents to disrupt the current landscape and offer more cost-effective alternatives to high-cost biologics, as seen in Table 2. 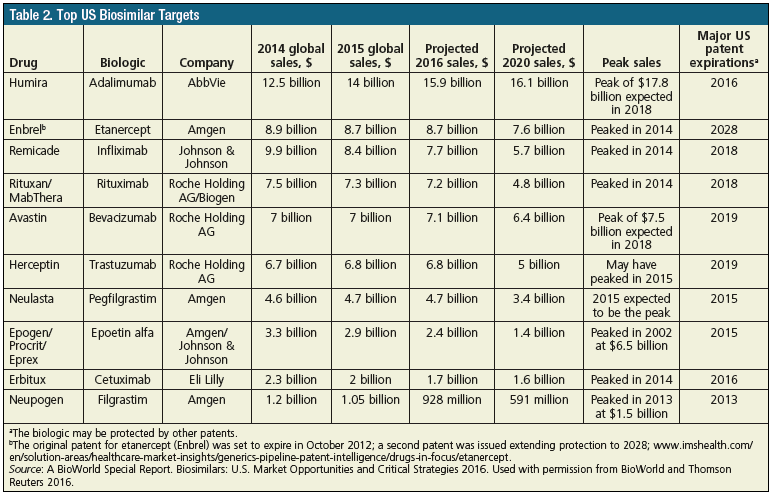 The data in Table 2 represent sales generated by 10 different biologics, including 4 of the top-grossing medications globally (ie, adalimumab, etanercept, rituximab, and infliximab). Together, these 4 medications accounted for approximately $40 billion in global sales in 2015, and each has multiple biosimilars in the US pipeline, in addition to infliximab’s biosimilar infliximab-dyyb, which has already received FDA approval.

An area where multiple stakeholders intersect is the pathway to interchangeability. As noted, the FDA has yet to release guidelines for interchangeability, creating a frustrated environment for manufacturers. However, a few biosimilar sponsors have begun studies where patients begin therapy with an originator drug, and are then switched to a biosimilar agent.2 Interchangeability is crucial for payers to gain confidence that their patients will be appropriately managed, for providers to have confidence in what they prescribe, and for manufacturers to continue to invest in the biosimilars market.

Within the world of high-cost biologics, providers need more treatment options, and payers need to expand access to treatment, both of which can be achieved through development of updated guidelines that are focused on the most cost-effective treatment regimens. In turn, this will provide manufacturers with confidence that appropriate pathways exist, allowing for market penetration of their drugs. With appropriate pathways, updated treatment guidelines, and a focus on stakeholder education, biosimilars will be given the right tools in a market full of opportunity.